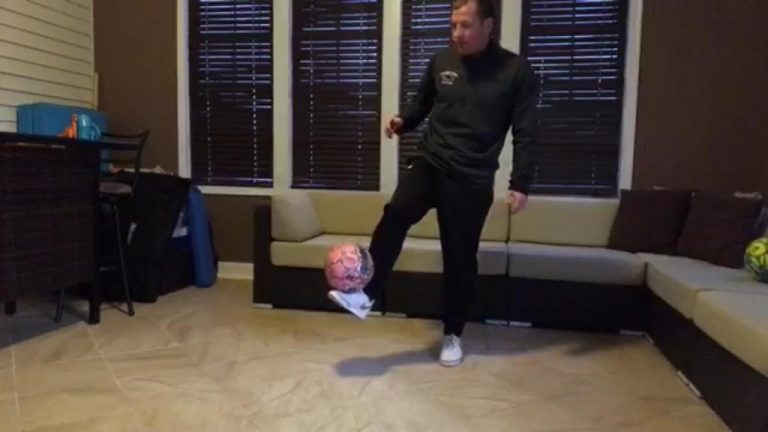 But last week, after the world was taken over by the coronavirus and NCAA shut down sports for the year, Wacker found himself home with his daughter, Aubrey, 8, and his son, Steve, 6, while his wife, Brittany, worked as a registered nurse.

“We had full days, starting at about 9 in the morning and would go until 2,” said Wacker, a 2001 graduate of North Catholic High School, a 2005 graduate of Temple University and a former star on the Philadelphia Kixx professional soccer team. “I think there are a lot of stay-at-home parents now and I don’t think anyone is going to tell you that that’s an easy job anymore. It’s hard.”

Wacker did a great job helping his kids adjust to the new normal of learning from home. And after seeing a post on Chris McKenna, another youth soccer coach’s Facebook, he decided to bring his passion to social media.

Wacker decided to set up a Facebook Live to hold 30-minute workouts. His plan is to do them twice a week, on Mondays and Thursdays, while soccer clubs in the area are holding off on practicing. For now they’re slated for 6 p.m. and they’re not the most strenuous workouts, but they will certainly get the heart pumping after sitting and doing boring school work all day.

And the best part is, you don’t have to worry about anyone else getting you sick because they’re done in the comfort of your living room.

“I’m not a big social media guy, I don’t have Twitter, Instagram, Snapchat, any of that, I just have Facebook and I don’t go on that much,” said Wacker, who coaches his daughter’s team at Philly Soccer and other youth leagues in the area. “I didn’t know how to do it. I did a test. I went out and got a tripod to hold my cellphone, then I had my niece Isabelle DiTullio come over, she’s young, she knows all that stuff and she helped me.

“It was pretty easy. And then I just did some drills. Nothing too hard. I said it’s for kids 6 and up, but if you’re 5 and skilled, you can try it. We start easy and then work our way up. It’s just a way to get some touches. And I told everyone, if it’s easy, do it faster and get more touches. If it’s too hard, slow it down, that will make it easier. It’s all the same drills.

“We had a lot of people doing it. I saw the first one had more than 4,000 views. I’m not sure how many of them were watching live. I was going to do something to maybe put it on YouTube, but I figured 6 p.m., that’s when teams are usually practicing. We can’t practice, so this is a way to get people doing it, staying on a schedule.”

Soccer has always been a huge part of Wacker’s life.

Born and raised in Holmesburg, the neighborhood he still lives in, he played soccer in high school and college before turning pro with the Philadelphia Kixx. There, he was drafted by fellow Falcon Don D’Ambra, and he helped lead Philly to the MISL championship in 2007.

But after his playing days ended, he decided to become a coach. Not only did he love the game, but he loved helping the next generation of soccer players succeed. Nine years ago, he joined D’Ambra and fellow assistant and North Catholic grad Pat Morris on the St. Joe’s staff.

Wherever he can help out, he’s happy to.

“I love soccer, but I love to do for kids what so many great coaches did for me for my whole life,” said Wacker, who was the MVP of the Catholic League in 2000 and a member of the North Catholic Soccer Hall of Fame. “Guys like Jerry Brindisi. He’s helped so many kids over the years. I’ve had a lot of coaches like that. If I can help a kid, especially in this time. It’s tough for parents and kids. People can’t do what they normally do.”

He also has a great tag team partner helping him out. Even though she’s very busy in the current climate, Wacker’s wife found time to help the children take part in dad’s drills. And they did pretty good for themselves.

“My daughter didn’t want to be on camera, and I don’t blame her, we didn’t know how it was going to go,” Wacker said. “So my wife took the kids in the basement and they did it. I know my daughter did it really well. I’m not sure about my son, he’s younger. But he started out with it. I was in the living room.

“It’s great because you don’t need anything other than a ball. It’s just drills. You’re just getting touches. It will keep you sharp, keep you doing it. I had young kids doing it, and there were guys on an over-35 team that took part. Anyone can do it. You just do it and try your best.”

The other best part? Anyone can do it.

As long as you have a computer or a cellphone or a tablet, or some way to get online, you can take part in Wacker’s drills. And he’s hoping anyone who wants to do it can find a way to log on.

“You don’t have to be friends with me, I make them public, so you don’t have to know me,” Wacker said. “Just Google Steve Wacker Facebook. That’s how a lot of people did it. The plan is to do it every Monday and Thursday. It’s just a way for kids to get some exercise and have fun. Get some touches and get a workout in. It’s fun, but it’s a workout.”

The kids love it too.

“I learned that if you want to play for the U.S. Soccer team someday, you have to put the extra work in on your own and not only when your team practices,” Meghan said. “The extra touches will help you become a better player.”

Procession held in memory of O’Connor

Staying at home and heroes in the River Wards