From Marge to Mrs. Claus

The 400 block of Miller Street resident has filled the role of the mythical figure for neighborhood organizations for two decades.

“It was right after my husband passed away, about 21 years ago,” Wible said. “Right after that, FNA decided to have the kids’ Christmas party. And, we started it, we asked different businesses to donate.”

“It turned out big because we had working families and a lot of kids in the neighborhood. And, it turned out fabulous,” she said.

Fishtown Neighbors Association hosted the parties at the Fishtown Recreation Center from 2000 to 2007 until Fishtown Action formed.

FACT continued the annual tradition at Holy Name of Jesus parish hall, with a sponsorship from Rivers Casino, until 2016, with Wible reprising her role every year.

In 2018, Rivers Casino, then SugarHouse Casino, hosted the event on site.

The casino also covered catering and provided entertainment at the event for previous years.

Getting into character comes easily for Wible, whose white-as-snow hair and wire-frame glasses make it difficult to see anyone else by Santa’s right-hand woman.

“Appearance-wise, I put on the outfit, I look like Mrs. Claus,” she said. “Whatever else comes out is what the kids make of me.”

She started borrowing a hand-made costume from a fellow neighbor and former FNA board member, then Wible began renting one until she bought her own at a Halloween costume store.

Wible goes all out in her appearance, with one exception.

“I don’t wear a hat,” she said, laughing. “I’m not a hat person. Even in the winter time, I wear ear muffs. If it’s snowing, I’ll wear a baseball cap with a hoodie over it.”

Aside from neighborhood civic groups, Wible has made appearances as Mrs. Claus at the American Legion Elm Tree Post 88 Christmas party the last few years including this past Saturday.

And, she will make a special stop at St. Laurentius School this Wednesday to spread the spirit of Christmas.

“I’ve never been booked for Mrs. Claus, and now I just have different groups wanting me to be Mrs. Claus,” said Wible, laughing. “I was kidding around with my friend and I said, “Guess what, I need an agent.” But I love it, especially now this time of year with everything going on.”

Outside of playing Mrs. Claus, Wible stays active in the community by volunteering at The Great Fishtown Spelling Bee and the March Academic Madness. 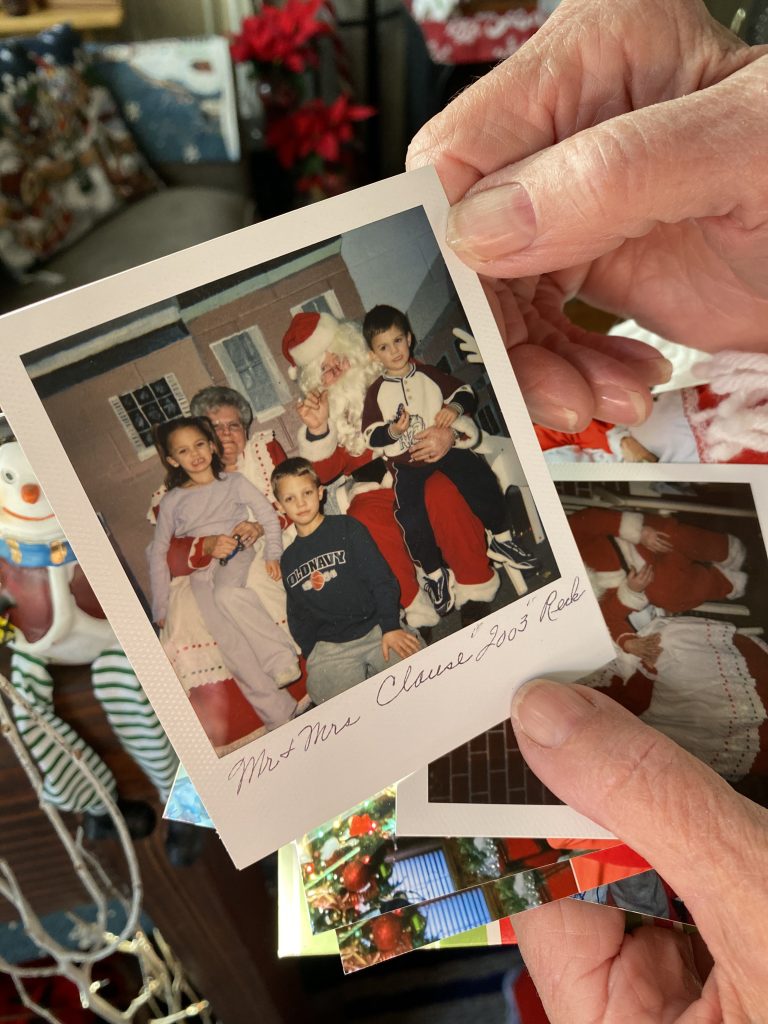 Marge Wible shares Polaroid photos of herself playing Mrs. Claus at Children’s Christmas parties of the past. MELISSA KOMAR / STAR PHOTO“Yes, they know, but sometimes they get confused,” Marge said of her youngest children recognizing her in character.

From family to the Fishtown community, spreading cheer to local families is the reason Mrs. Claus comes back every season.

“That’s what it’s all about. It’s about the kids and the families,” Wible said. “Even if it’s 2020, or when I first started years ago. It’s the same thing: families and kids. It’s a great feeling to make the little ones happy.”

Water Ice with a Cop

As a lifelong resident of Fishtown, Rose Ellis has seen the parking situation in her neighborhood go from good to bad. “Here’s an example,” said...
Read more
Featured | Home Page