The Star caught up with Ayres to talk about what led him to make the transition from sculpting to watercoloring, why amplifiers are such cherished tools of the guitar trade, and what music inspired him to make pieces for his upcoming exhibition. 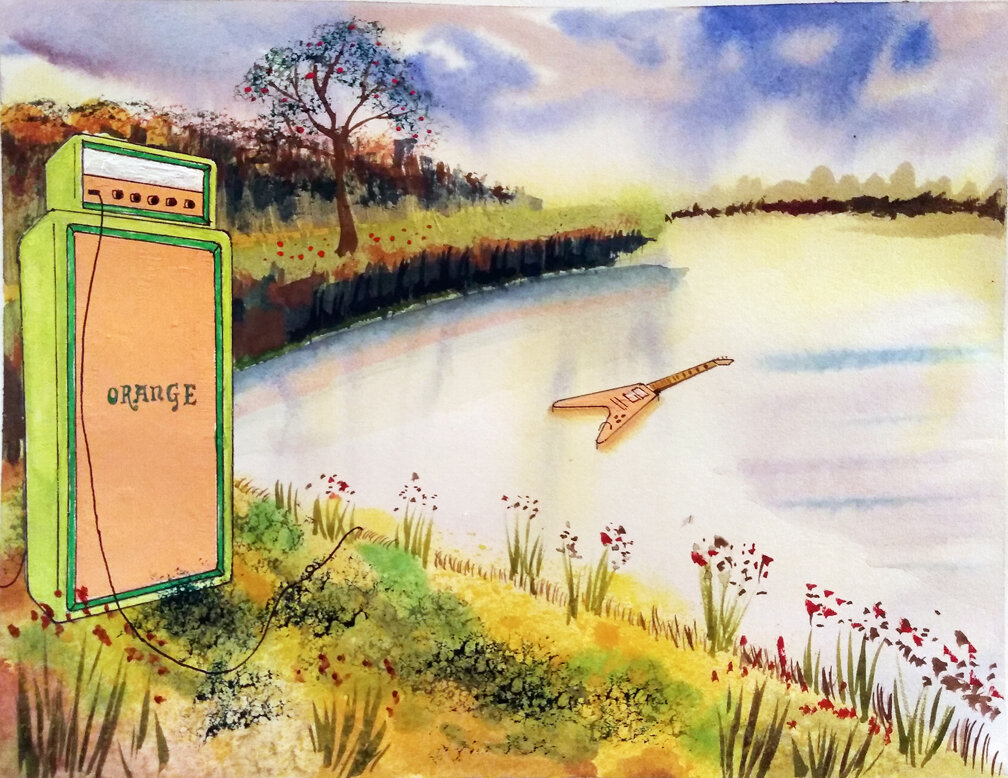 In what seems to be the latest edition of how artists were inspired by pandemic, South Philly sculpture artist Derek Ayres is slated to unveil his latest exhibition, Plein Air Guitar, at See Here Now pop up gallery, located at 2237 N. Front St. in Kensington from Sept. 18-19 as part of the 2021 Philadelphia Fringe Festival. Ayres, a guitarist, started drawing his beloved vintage guitar amps in his basement studio to pass the time. He decided to fill the blank white space with watercolor landscapes a la artists of the plein air movement in 19th century France. The Star caught up with Ayres to talk about what led him to make the transition from sculpting to watercoloring, why amplifiers are such cherished tools of the guitar trade, and what music inspired him to make pieces for his upcoming exhibition.

Can you describe what the plein air is and what inspired you to insert guitar amplifiers into that style of painting?

If you look it up, it’s a French term, I believe. It has to do with outdoor painting or painting outdoors. I know the language is French, but I think it was actually an English movement, if I’m not mistaken. It’s still popularized today. It’s sort of the stereotypical guy that goes outside with an easel and a little box set of oils or watercolors or whatever and sets up in a field or in a park and it’s really romanticized impression of an artist who paints outdoors.

All of my work is done indoors in my basement studio without a window. I’m following along with YouTube instructional videos. So it’s kind of tongue-in-cheek. It kind of grew out of a game that I set up for myself being forced to be indoors during the pandemic.

As far as the guitar amps, you go into a music store and any kid or any person really who’s interested and there’s just this draw to the stuff. It’s almost like monuments or almost like a talisman-type of draw – particularly to musicians. They’re drawn to guitars, they’re drawn to amps. It’s an odd kind of relationship with gear. 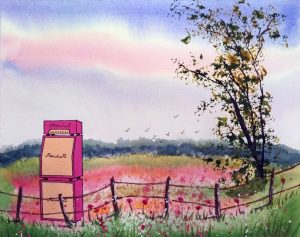 I think most non-guitar players see guitar amplifiers as nothing more than a tool guitarists use for their craft, sort of like how a plumber needs a wrench. Can you explain why guitar amplifiers, unlike other tools, are cherished and desired pieces of art among guitarists?

It’s hard to explain. I know plenty of people who own guitars but don’t play guitar. I’ve met more than a few people who’ve bought gear and never learned to play. I think it signifies some sort of youthful fascination or rebellion. It goes back to wanting to be Jimmy Page or wanting to be Ace Frehley. Picture a guitar player – I think particularly for a certain generation of people – I think they just signify a formative thing from your childhood that just kind of brings you right back to, you know, pretending you’re acting out all the different poses that Ted Nugent hit in Double Live Gonzo! in your bedroom with a tennis racket. I think it just takes you back to a certain place and I think it takes you back to riding in your dad’s car with the windows down going to the beach and blasting Van Halen or earlier Jimi Hendrix who came before that.

Why did you choose to put guitar amps in most of your pieces rather than guitars?

I think in some of the paintings both the amps and the guitars serve as stand-ins for people or figures, the sexes and the genders are kind of mixed. They can go back and forth depending on the picture … I just felt like I was developing this existential thing going on with the single amps and the landscapes and now they’re starting to develop more where [there’s symbolism in the pieces]. The one that has the snow in it and then there’s the one that’s like the large Orange amp is plugged into a floating Gibson [Flying] V on a lake. That painting is a direct Garden of Eden parabole. There’s a tree with apples on it. There’s all these details you’d have to really actively look to get all of that. But if you go back and you look at it you can see that. I think it’s just expanding the narrative. These are basically loose paraboles, loose interplays of symbols and metaphors that are going on for me.

What made you want to make the transition from sculpture to watercoloring?

I had a hiatus period where I made work in York. I showed a sculpture that was received pretty well critically and then I moved to Philadelphia and started a family. Then the pandemic happened and I couldn’t really go outside. To get back into having not made work in a while, having some limitations like, ‘You’re just going to do some watercolors, you’re going to develop this idea,’ – you can develop the idea and flush it out fully. That just appealed to me.

I think coming out of such a regulated time with the lockdown, I think that this series kind of mirrors that. There’s just some constraints set in. They’re all 8x10s. I’ve never had to work relatively this small before and try to communicate something.