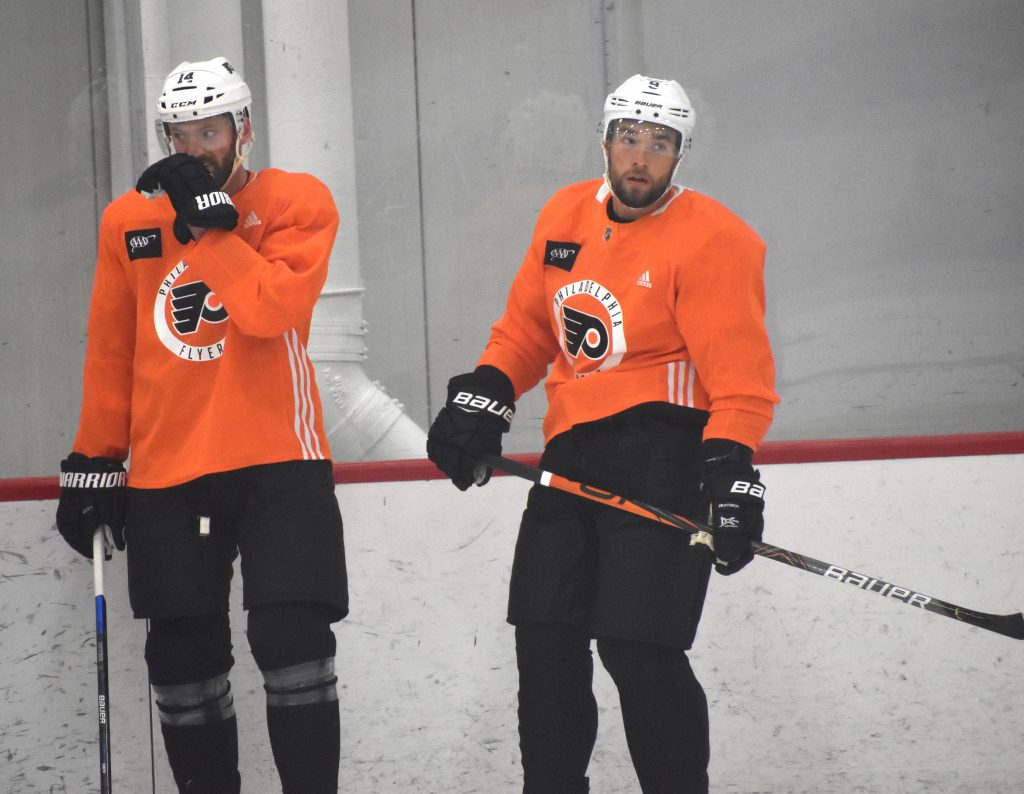 Last year, the Flyers finished with the fourth-worst record in the National Hockey League.

In what seems like another lost season, Flyers management could start looking at possible trades although some suitors would rather wait until the trade deadline to accumulate as much cap space as possible and pay less in real money for the acquisitions.

But let’s go ahead anyway and sort the Flyers roster by the likeliness of pulling off a trade. Some will be easy. Others are immovable. And all will vary on the type of return they would bring back. Let’s start with the easier ones.

Expect them gone: James van Riemsdyk and Justin Braun are both on expiring contracts and should be viewed as targets at the deadline. If the Flyers retain half of JVR’s $7 million cap hit, he should be a sought-after piece for a team looking for depth scoring. Braun was in this position last year and was traded to the New York Rangers for a third-round pick. He came back to Philly by signing a new one-year contract with the Flyers again in the offseason. Lukas Sedlak, Patrick Brown and Max Willman also fit the category of pending unrestricted free agents who can be moved easily, however the return would be minimal.

Wouldn’t be surprised: Tony DeAngelo signed a two-year deal in the offseason with a $5 million cap hit. He’s a proven power play producer who hasn’t had a lot of talent to work with this season. There’s a market for him. Nick Seeler also has a year left after this one and makes just $775,000. He’s played pretty well for what he is asked to do.

Minor shakeups: Have guys like Morgan Frost, Jackson Kates, Kieffer Bellows and Zach MacEwen done enough to earn an extension? They are all pending restricted free agents, which means they are still under team control if given a qualifying offer. Frost is the intriguing one as he has a scoring pedigree that has yet to translate in the NHL. We’ll throw Tanner Laczynski, Wade Allison and Felix Sandstrom in this group although they all have another year under contract. Owen Tippett probably falls somewhere between minor and major shakeup as he is showing promise and was the return from the Claude Giroux trade last year, which might hold a little extra weight.

Major shakeups: Joel Farabee, Travis Konecny, Scott Laughton, Ivan Provorov and dare we say Carter Hart all have plenty of term on their contracts and are signed to arguably pretty decent numbers. The franchise needs a kick in the pants and these are your major trade chips. It remains to be seen whether ownership will give a mulligan for the 2022-23 season because of injuries, or finally realize that real change is needed. If it’s the latter, these are guys who would bring something back in a trade.

Weighed down by the cap: The time to trade Travis Sanheim or Rasmus Ristolainen has passed. Both were on expiring deals and the Flyers decided to give both long-term extensions at numbers that will likely chase suitors away. Sanheim’s eight-year $50 million extension, which starts next year, is probably too big of a risk for other teams to take on at this point and his no-trade protection also begins next year. Ristolainen has another four years at a $5.1 million cap hit, which makes moving him very difficult without the long-term burden of salary retention.

Hayes has three years left after this season at a $7.14 million cap hit and there aren’t a lot of teams that are looking to fork over that dough for a second-line center, despite the good numbers he’s putting up this season. Hayes also has a 12-team no-trade list, which could further complicate things.

This summer, Couturier will be coming off back-to-back seasons that were ruined by injury. He’ll have seven years left on his deal with a $7.75 million cap hit and he turns 30 next week. Couturier has a clause in his contract where he would submit a list of only 10 teams that he could be traded to.

Ryan Ellis hasn’t been able to get on the ice and there’s no signs of that happening any time soon. Until then, he’s on the Flyers payroll until 2027.

Cam Atkinson’s injury, age (33) and trade protection make him a tricky guy to trade, too. Atkinson hasn’t been able to get on the ice yet this season and he has two more years on his contract that has a $5.875 million cap hit. He also has a 10-team no-trade list. When he’s in the lineup, he’s productive, but that might not be enough to get a deal done.

Deslauriers signed a four-year deal over the summer that comes with a $1.75 million cap hit, and the option to submit a list of 20 teams where he can be traded. Deslauriers’ cap hit isn’t a big deal in the long run but the Flyers seemed pretty determined to get him here so it would be pretty shocking if they parted ways.