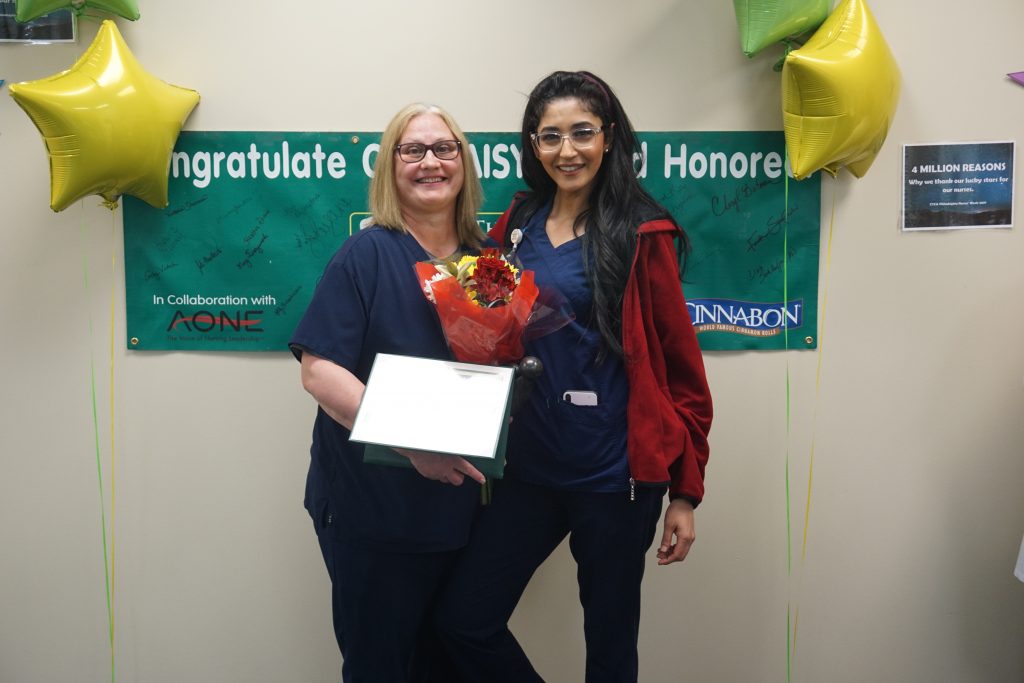 When you ask Jackie Sweeney her favorite part about being a nurse, she doesn’t hesitate to answer.

“Helping people,” she’ll tell you, just like she told the Star over the phone in last week’s interview. “If I had a family member [in the hospital], I would want somebody to treat them like I treat my patients. So I just consider everybody like they’re one of my family.”

Sweeney, who is from Port Richmond but works as a nurse at Cancer Treatment Centers of America in Juniata, is the most recent recipient of the DAISY award. The award was established by the DAISY Foundation to honor nurses who dedicate themselves to their patients. The DAISY (Disease Attacking the Immune System) Foundation is a nonprofit organization that was established in memory of J. Patrick Barnes, who passed away of autoimmune disease.

“It is to recognize excellence in nursing and excellent care going above and beyond,” said Sweeney’s boss, Jessica Queenan, nurse manager at Cancer Treatment Centers of America. According to Queenan, who nominated Sweeney for the award, that’s exactly the kind of nurse Sweeney is.

“I nominated Jackie because not only does she really go above and beyond, but I often get great compliments from her patients when I’m in visiting with them.” Queenan said. “Jackie has one of the biggest hearts of anyone I’ve ever met, and she puts everything into her work, and it shows. She’s a great team player, and a great leader on her unit.”

Sometimes, being a nurse can be an especially tough job.

“I’m going to cry saying this,” Sweeney, fighting back tears, said, “but when you help somebody transition to the other side and you make them comfortable and you include their family in it. It’s – I don’t know, if I had a family member [in that position], I would want somebody to treat them like I treat my patients.”

But there are moments that make it all worth it. Queenan told a story about one particular patient who, along with her family, got to ring the center’s celebratory bell upon the completion of the program’s treatment.

“It was just so special and she was so thankful and Jackie made that all happen and I thought that was just outstanding,” said Queenan.

Interestingly, before she became a nurse, Sweeney worked as a secretary in an advertising firm. It wasn’t until she was in her mid-30s when she went to her pharmacy to pick up a prescription for her uncle when she saw an advertisement for an open house Northeastern Hospital was having for its nursing program. Luckily for Sweeney, who had only a high school diploma at the time, no prerequisites were required.

Sweeney eventually went to school, earned a bachelor’s in nursing and landed the job at Cancer Treatment Centers of America. She went back to school in 2014 for her master’s, which she completed in 2017. Now, she’s a nurse practitioner.

As a result, Sweeney will soon be leaving Cancer Treatment Centers of America and moving on to the next chapter of her nursing career.

“I hate to lose her here,” Queenan said, “but I support her fully because she’s amazing and wherever she goes, she’ll be great.”