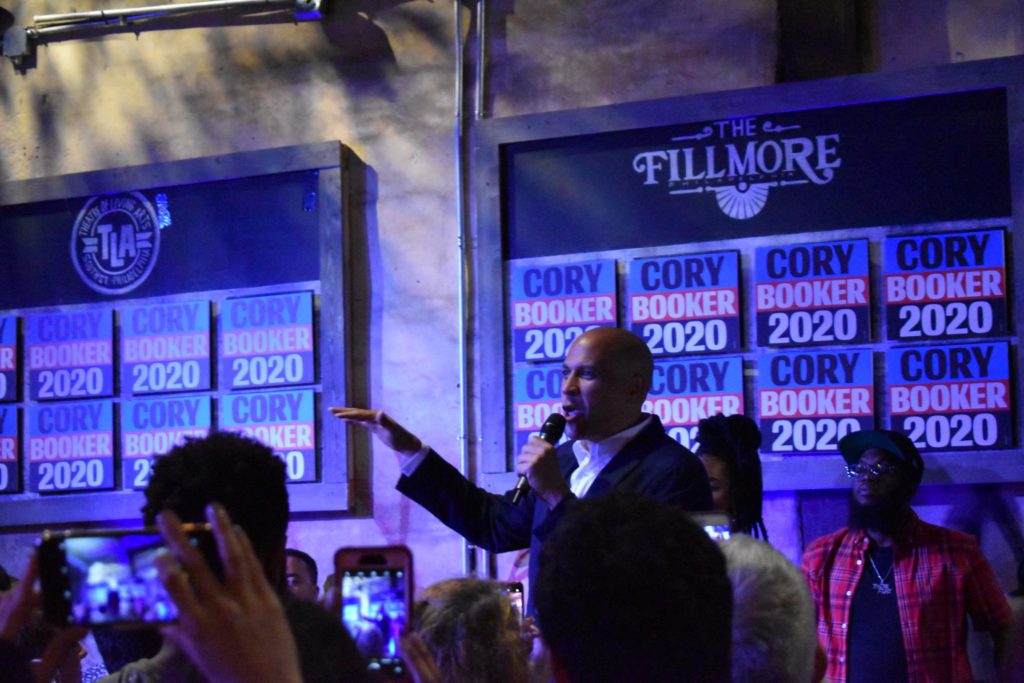 It was three years ago at the Democratic National Convention in Philadelphia when one speech seemed to rise above the others. It was a “rousing” speech, according to ABC News, and one that was given by “a star of the future,” The Independent wrote in the headline of its recap on the address. It was a speech that “[lifted the] crowd to its feet” and reminded some “of a younger Barack Obama who keynoted the 2004 Democratic convention,” according to CNBC. It touched on income inequality, criminal justice reform, immigration, love and Maya Angelou.

“You may write me down in history / With your bitter, twisted lies / You may trod me in the very dirt / But still, like dust, I’ll rise,” the speech quoted from Still I Rise, one of Angelou’s most popular poems.

The speech was given by a 6-foot-3 former tight end at Stanford University who would later earn his juris doctor from Yale. Later in life, around the time of the 2016 convention, he’d become touted as a “rising star” of the Democratic Party. His name was Cory Booker, and in February of this year he announced his campaign for the United States presidency.

He surprised no one.

Fast forward six months to the present day, and you’ll find that Booker has indeed surprised many. Despite being touted as a “rising star” of Democratic politics by virtually every commentator in attendance for his rousing 2016 DNC speech, Booker has quickly become a falling star. According to a Monmouth poll released Thursday, Booker is currently polling at a mere 1 percent in the Iowa Democratic caucus. Compared that to Joe Biden’s 28 percent, Elizabeth Warren’s 19 percent, Kamala Harris’s 11 percent, Bernie Sanders’s 9 percent, Pete Buttigieg’s 8 percent and Amy Klobuchar’s and Tom Steyer’s respective 3 percent figures in the same poll. Booker is similarly behind in virtually every other state he’s polled in. The most recent national poll at this time of writing, which was conducted jointly by the Economist and YouGov, has Booker polling at only 2 percent throughout the entire United States.

Unlike many other Democratic candidates, Booker, who’s trying to shed a reputation for being cozy with big-money interests (Wall Street and the pharmaceutical industry, in particular), hasn’t quite warmed up to the progressive side of his party despite a pledge to stop taking big pharma money in 2017. In lieu of discussing the economic tribulations many working-class people suffer from like Sanders and Warren do, Booker has instead focused his campaign on tackling gun violence and racial issues. Booker’s speech at the Fillmore Wednesday night continued that theme. The previous night, he spoke at Mother Emanuel AME Church, the site of the Charleston church shooting on June 17, 2015.

“This is the church that has seen tragedy visited upon it in multiple points of American history but never stopped, never gave up. [It] showed the redemptive power of love and forgiveness, shown what it means to live your values,” Booker said, tugging on the heartstrings of the Fishtown crowd that evening.

“Where have we come as a nation – where we have so capitulated to violence in our communities – and our way of dealing with it now seems to be that when we send our kids to school, they’re learning about reading, writing and arithmetic and shelter-in-place drills. What message are we sending them that this is how we’re going to try to cope?”

“Individuals could seek a gun license at a designated local office, widely available in urban and rural areas, similar to applying for or renewing a passport,” reads a Medium post written by Booker. “They would submit fingerprints, provide basic background information and demonstrate completion of a certified gun-safety course.”

The same Medium post details some specifics on microstamping, which, according to the post, “is technology that allows law enforcement to identify the source of ammunition used in crimes by making a shell casing traceable to the specific gun that fired the round…Microstamping technology would allow law enforcement to trace crime guns as soon as a shell casing is found, helping to prevent future crimes from occurring.”

Despite being one of the few candidates in the primary to have specific details about how they’d combat gun violence in America, Booker didn’t touch on them during his Fillmore speech Wednesday. Alternatively, Booker was light on policy, and focused instead on vague politician-y verbiage designed not to inform voters, but rather to inspire them.

“I’m running really because I worry about the soul of our nation,” is one example of such a nebulous phrase Booker enunciated Wednesday night. “Donald Trump does not define us; our love defines us,” is another.

Speaking of the president, Booker attacked members of his own party for merely wanting to nominate a candidate who they think can defeat him. Instead, Booker portrayed himself as the candidate who’s more connected with the everyday needs of voters and is equally as frustrated as them with the lack of headway made when it comes to creating meaningful change for ordinary people.

“I get confused by my party sometimes,” he said, waving his hands and furrowing his brow. “We poll Democrats and you know what their No. 1 issue is? We just want somebody who can beat Donald Trump. And I’m like, ‘We’ve gotta have some bigger aspirations than that.’”

Booker continued: “We can’t define our party by what we’re against,” he said. “We need to define us by what we are for.”

Toward the end of his roughly 20-minute speech, Booker characterized himself as an ally to minorities and women, highlighting his desire to do more for these communities.

Although he distanced himself from Biden, who is seen by many merely as a candidate who can beat Trump despite his purported lack of desire to produce substantive change, Booker did take a page out of Biden’s Take-Me-Back-to-Barack playbook.

“I miss Obama,” he said to a thunderous cheer. “And I miss her husband, too.”