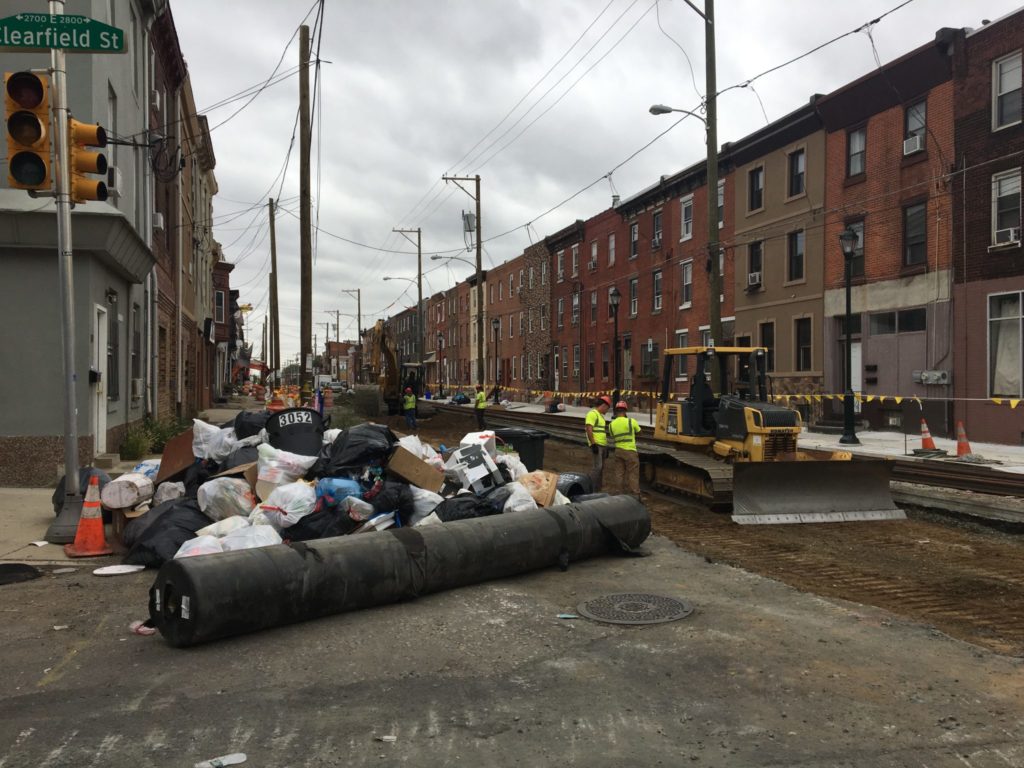 When Joe Livewell was growing up in Fishtown, getting to Port Richmond was easy.

“You’d come from Girard to Richmond Street and it would be a straight shot on the trolley,” he said. “It’s not that easy to get to Port Richmond now.”

Nowadays, Livewell, who owns the River Wards Cafe on the 3100 block of Richmond Street, says it’s “a different experience” to get to his neighborhood. The recent construction along Richmond Street, coupled with the bus line that replaced the eastern half of the 15 trolley (the trolley still operates from 63rd Street to Frankford and Delaware avenues in Fishtown), has forced travelers to “navigate underneath the trestle of Conrail,” Livewell said, which, compared to the novelty of taking the trolley along Richmond Street, is quite a different ordeal. It’s why Livewell is excited to get the 15 trolley rolling by his storefront for the first time since his business opened in 2016.

“We put a trolley in our logo for that very reason,” he said. “Being on a trolley line that I was aware would come back was not critical necessarily in the decision-making that started our process of opening here, but it definitely was another feature of why this [location] makes sense.”

Will the reimplementation of the trolley along Richmond Street – which is slated to happen either next year or the year after, according to SEPTA spokesman Andrew Busch – have a positive effect on Livewell’s business? He suspects so. But because the trolley’s absence dates to 2012, before Livewell’s business opened up, he has nothing to compare it to. Up until this point, a trolley-less business is all Livewell has ever known. That’s not the case for Greg Gillespie, though.

“There was a trolley when I first got here, and people could come in and take the El, then the trolley right over to my building,” said Gillespie, who owns the soon-to-be-closed (and likely demolished) bookstore on the 3000 block of Richmond Street. When the trolley was removed and replaced with a bus, Gillespie, who first opened his business in 2004, noticed the negative effect it had on his business.

“It’s impacted not just me but other businesses as well,” he said. “It impacted Krakus, a Polish market [that closed down last year], and then across the street there was Syrenka’s, which had to close.”

Also across the street was Szypula’s Bakery, owned by Connie Jesiolowska. Szypula’s closed down in 2012, soon after the trolley was taken away. Despite that, Jesiolowska’s feelings about the trolley aren’t quite the same as Gillespie’s.

“My personal [feeling] is that it’s not going to matter,” Jesiolowska said when asked if she thinks the trolley has a chance to reinvigorate the formerly thriving business corridor. “I didn’t see much of a difference when the buses came [replacing the trolleys].”

But mostly, she just sees the trolley as a pain.

“I’ve been on Salmon Street for 67 years and I [grew up] with the trolley,” she said. “The trolley was a hindrance because it would break down and hold up traffic…As a car driver living in Port Richmond, it was really a pain.”

AJ Dougherty, who opened Marinucci’s Deli next door to River Wards Cafe a year ago, told the Star that he estimates he’s losing 40 to 50 percent of his business at his Port Richmond location (the original Marinucci’s is in Mayfair, opened in 1991) because of the construction. He said that customers have told him about how difficult it is to get to the store.

“If I was a customer, I’d turn around, too,” he said. “We’re nowhere near where we want to be business-wise, but it’s what we expected.”

Because of the Mayfair Marinucci’s success, Dougherty’s been able to weather the storm. Similarly, Livewell also prepared for the construction, which he knew would eventually begin soon after he opened his business.

“When I borrowed from a local bank, I made sure that in the event of a downturn we would have the ability to stick through that with some working capital on hand,” Livewell said. “We were basically starting this place with the idea that it would take some time [to hit our potential] and we planned accordingly to make sure that there is cash on hand.”

But what is that potential? Could Richmond Street ever see the success of Frankford Avenue in Fishtown?

“I fail to see where people think Richmond Street is going to be like Frankford Avenue in Fishtown,” said Jesiolowska. “The area is so small. It’s just these two blocks.”

“That is my argument when people have visions of this big thing,” she said. “You can’t go on the other side [of I-95]. There’s nothing you can do unless the gas companies and all move.”

For Sean McGuinness, owner of the nearly six-month-old Lunar Inn across the street from Marinucci’s Deli, turning Richmond Street into Fishtown isn’t exactly a priority for him. In fact, he discourages it.

When McGuinness opened up his bar and restaurant several months ago, he laid out his expectations for his business’s first year. He expected it would be busy in the beginning, drop off during the construction, then recuperate once the weather gets colder and the construction finishes.

“And that’s pretty much right where we’re at,” he said. “We definitely saw [the construction] as a challenge and something that we would have to navigate through, but we thought that the benefits outweighed whatever challenges long-term.”

The success of McGuinness’s bar and Livewell’s coffee shop fits in perfectly with Jesiolowska’s long-term prediction for the neighborhood.

“In Richmond Street’s heyday, we’re talking people with little kids and families going to the dry goods stores,” she said. “I don’t think people do that anymore. I think it’ll lean more towards bars and restaurants and coffee shops.”

Al Penner, owner of Penner’s Floor Coverings, which has been located on the 3000 block of Richmond ever since construction of I-95 forced it to move there in the early ‘60s, agreed.

“The new blood seems to be coming into the neighborhood,” said Penner. “You can see the beginnings of a change. It’s a different generation. It’s more restaurants and the craft beer scene. We’re going to see more of those types of businesses moving in.”

Penner said the construction on Richmond Street hasn’t really affected his bottom line due to the nature of his business. He’s not selling goods “you can take home in a paper bag,” he said, like many of the other stores. It has, however, caused him to work harder since it’s difficult for customers to get to his store.

“When the customers can’t get to the destination, you have to go to the customers,” he said. “[The construction] hurts everybody [on the street], but you can walk and pick up a water ice or a bag of chips, but you’re not going to walk home with a carpet.”

Construction aside, the way of doing business these days simply ain’t what it used to be in the age of Amazon and other virtual big box stores.

“My generation has been doing its thing for 30 or 40 years, and let’s face it – we’re dinosaurs,” said Penner. “It’s all over the country where people don’t go out to their local corner grocery or their bookstore and kill 15 or 20 minutes. By the time they drop their kids off at daycare and pick them up at night, they’re done.”

If the eventual construction of Richmond Street doesn’t pan out for local businesses, there is one more hope, however: Jesioloska could win the lottery.

“I tell this to everybody,” she said. “My dream is to hit the lottery and buy all the stores on Richmond Street and make them into restaurants and books and antique stores.”