The mural, entitled “Free and Clean,” was created by Henry Bermudez for Mural Arts Philadelphia to symbolize the resilience of the Kensington community and bring hope, color and a sense of brightness to the neighborhood.

In honor of the one-year anniversary of the Philadelphia Resilience Project, the city’s Mural Arts Program painted a new mural under the bridge that used to shelter the Kensington encampment at the corner of Kensington and Lehigh avenues.

The mural, entitled “Free and Clean,” was created by Henry Bermudez for Mural Arts Philadelphia to symbolize the resilience of the Kensington community and bring hope, color and a sense of brightness to the neighborhood. The corner of Kensington and Lehigh avenues, just one year ago, was the home of dozens of individuals residing in a large encampment. Closing that encampment, and three others like it, is among the top achievements of the Resilience Project. 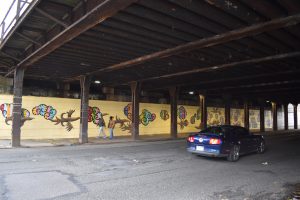 “Recently, Mural Arts was thrilled to partner with the Resilience Project to help reclaim and transform an important gateway in Kensington,” said Jane Golden, Mural Arts Philadelphia executive director. “The murals in our city underscore our desire for meaning and for beauty. This new work of art by Henry Bermudez is a wonderful new addition to the collection as it provides the viewer not only with something unexpected and colorful, but the art also provides us with hope and with meaning and encourages us to look towards the future.”

“When I first went to see the wall, I realized that what I created would need to connect with the reality of the sometimes ugly environment in which this mural would exist,” Bermudez said. “My main goal was to create something beautiful to symbolize freedom and cleanliness for the neighborhood and those who have been impacted by opioid abuse disorder. The birds and other elements of the mural help symbolize this sense of freedom that many in the community are fighting for.”

Officials were joined by Jolene Piliero, a resident with first-hand experience in the area, having stayed at the former encampment at Kensington and Lehigh.

“It’s great to see the city working together with the community to create something so beautiful that gives people hope,” said Pathways to Housing PA participant Jolene Piliero. “A year ago, I was struggling with addiction, and now I’m working and will go back to school. This shows that when people come together and are willing to help each other, community members, like me, have a chance at recovery and success.”

The city’s managing director, Brian Abernathy, touted some of the achievements of the Resilience Project since its inception last October. Among them were: