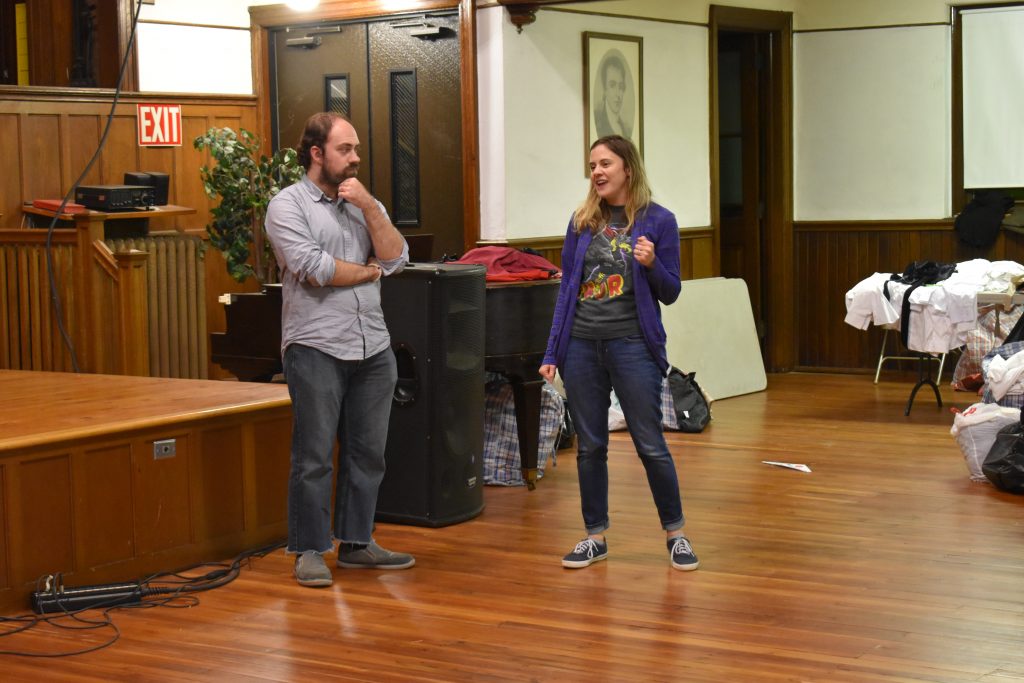 Fresh off celebrating its second anniversary, the River Wards Theatre Company is busy preparing  for its second full-scale production.

The nonprofit community theater organization formed in October 2017 and has since put on a couple of cabaret nights, Addams Family the Musical in Concert at Mother of Divine Grace in Port Richmond, and Crazy for You at St. John Cantius in Bridesburg.

This weekend, the group will take over Summerfield Methodist Church in Fishtown and present Little Women the Musical, based on Louisa May Alcott’s famous novel.

Becky Crunk, vice president of RWTC board, has been with the company since Day 1 and will make her directorial debut.

“It honestly makes me more excited for where we’ll be in the next two years because I know how much we’ve grown in that period,” she said.

Crunk has a full-time managerial position with an insurance company and enjoys the challenge of switching between roles and being able to put her theater degree to work.

“It’s getting back into the other side of my brain analysis,” she said. “It’s not looking about whether X plus Y equals Z, but I’m thinking about the emotions about what’s going on behind the show and why each character is doing what.”

Crunk is also music directing the upcoming production, so, “There’s still some math involved, but the good kind, in my opinion.”

She also sings with the Pops Festival Chorus on Tuesdays, so her life is very much “a lot of music in the evening, and then business during the day.”

While it’s pretty much a part-time job for all board members to keep the group moving full-steam ahead, it’s made possible through the backing of the neighborhoods.

“We absolutely wouldn’t be where we are now if we hadn’t had the support of the community, so we’ve been very lucky that people have been very supportive of us and coming out to our projects,” Crunk added.

Port Richmond resident and Torresdale native Mary Tomson, 33, made her debut with RWTC in Crazy for You and will play her first lead role, Jo March, this weekend.

“It was the first audition I had done in a while,” she said. “I really enjoyed the energy of the group. I felt like it was the best version of community theater I had ever come across. Everyone is very professional, and there is no drama in the group. It’s a really good vibe. So, I decided to do this audition as well.”

Tomson had taken a nearly 10-year hiatus from theater to get married and have children, who are now 5 and 2.

Prior to marriage and children, Tomson participated in theater in high school and college and ran a theater troupe at St. Katherine of Siena Church.

She is a cantor at several local churches, including St. Katherine, St. George and Nativity BVM and events at Our Lady of Port Richmond School.

For Tomson, the hardest part in taking on a lead role, specifically Jo March, is separating herself from the character.

“I was an English major and Jo is a writer and our personalities are a little similar so the hardest part for me is trying to find those differences,” she said. “When the character is similar to you, it’s harder to develop that character sometimes.”

Tomson is no stranger to the character and was in a book club that read the novel before her audition.

“It’s a super familiar story. And,the musical respects the general knowledge of the audience. I think everyone has probably seen some version of the movie or read it in high school,” she said.

Tomson noted the musical is family friendly, but there are some emotionally intense moments.

Theatre is a way to deal with harder emotions, Tomson added.

And, while the novel is set in the 1860s, Crunk thinks those emotions and the overall message to be received is still relevant today.

“For me personally, I always identified with Jo [March], that independent woman who didn’t want to be put in that box of what a woman should be,” Crunk said. “I know people are afraid of the ‘F’ word, but I’ve had feminist leanings my whole life. And, I think in the climate of culture right now, it’s important to keep telling a story that’s based on four sister who compel each other to be the best of themselves. It’s hard sometimes even being 2019 to make your statement. It’s that whole concept of breaking glass ceilings.”

“It doesn’t just have to be women. Really, it’s about anyone who thinks they don’t have a voice or is being limited by society,” she said. “It’s about making sure everyone is getting the right to be who they are, where they are in whatever space they are and not admonished for it, but celebrated for it.”

Crunk also pointed out how the musical aligns with the organization’s mission.

“It’s a story about storytelling and using your imagination, which fits in perfectly with the theater company, because that’s our mission statement essentially, to tell stories and entertain and reflect that to the community,” she said.

River Wards Theatre Company will present Little Women the Musical on Saturday, Nov. 9, at  7 p.m. and Sunday, Nov. 10, at 2 p.m. at Summerfield United Methodist Church, 2223 E. Dauphin St. Tickets cost $15 and can be purchased at the door or in advance at https://riverwardstheatre.ticketleap.com/littlewomen/.

If you’re a River Wards Democrat who’s opposed to safe injection sites, you have nobody to root for in the area’s two biggest primary...

Read all about it