City Councilwoman Maria Quiñones-Sánchez called for action in a Tuesday morning news conference outside the Esperanza Health Center at the corner of Kensington and Allegheny avenues. 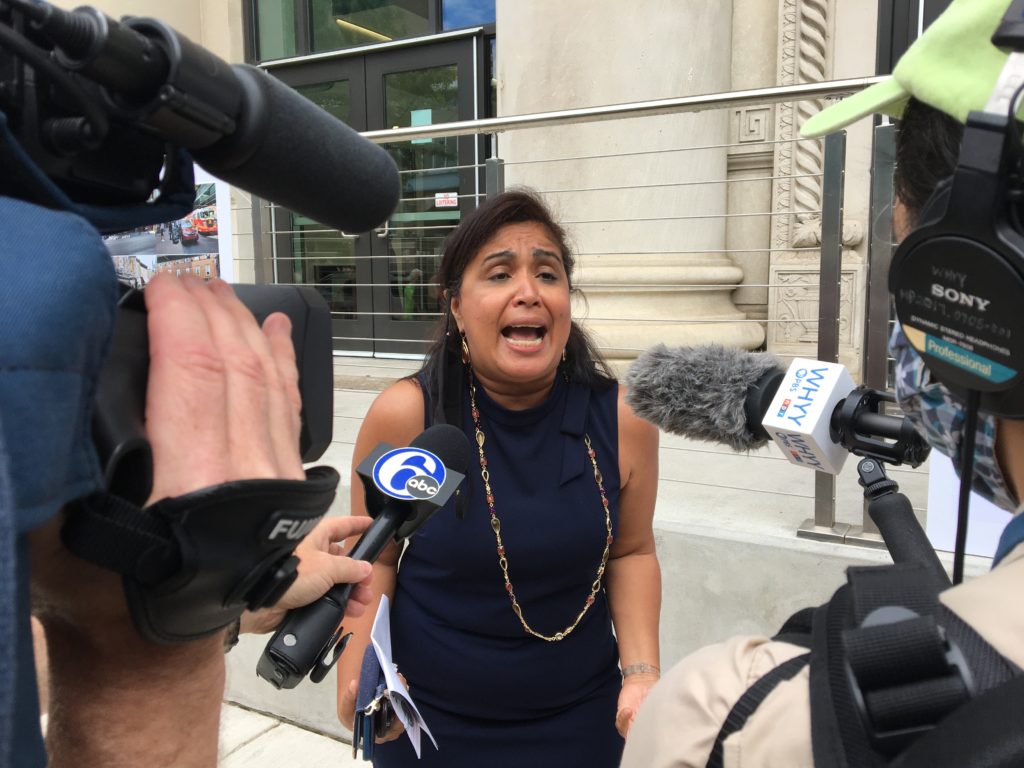 After weeks of complaints from residents about a higher-than-usual volume of trash on the streets in the Kensington area, City Councilwoman Maria Quiñones-Sánchez called for action in a Tuesday morning news conference outside the Esperanza Health Center at the corner of Kensington and Allegheny avenues.

“I grew up in Hunting Park and I’m not shy about a lot of things, but the things I’ve seen for the last three months have outraged me,” she said. “There’s vandalism every single day in this neighborhood. It’s a broken window, it’s a broken light, it’s a broken door because someone’s trying to break in.”

On Thursday, Quiñones-Sánchez introduced legislation aimed at creating a plan to combat the excessive trash and “unlivable conditions in the community,” a press release from her office read.

In many areas of Kensington, the streets are lined with litter, especially used syringes. In 2019, the 19134 zip code had the most EMS Naloxone administrations, according to the city’s department of public health.

“Kensington is an area of the city that has been grossly underserved for years,” said Councilmember Mark Squilla. “The current plans and processes have not worked. We must invest heavily in the neighborhood to deliver the much-needed services and support to help our residents with their quality-of-life issues. We must reverse the declining trend so that Kensington will be on a real road to recovery.”

“We need to commit to the safety, health, and prosperity for Kensington and every Philadelphia neighborhood,” he said. “We need to help people move off the streets and into intensive treatment that will allow them the chance to break away from the chemical dependence. Inaction is not an option, and the City cannot sacrifice a whole community to addiction.”

At the news conference, Quiñones-Sánchez slammed Mayor Jim Kenney for his poor leadership, which she says is at least partially to blame for the current state of Kensington.

“What we need is leadership,” she said. “So Mayor Kenney, you come down to Kensington and you tell me you’re OK with this under your leadership.”

The mayor’s spokesperson, Mike Dunn, said that the Kenney administration “has long shared the Councilmember’s commitment to doing everything possible to improve the quality of life of Kensington residents struggling amid crime and deteriorating neighborhood conditions, while also helping those experiencing homelessness and suffering from substance use disorder.”

Tens of millions of dollars were invested into this type of work since 2016, Dunn said, mainly through the Philadelphia Resilience Project, which is a neighborhood-centric effort to clear encampments, reduce levels of litter and increase treatment options for those suffering from addiction.

Dunn added that the administration is “currently assessing strategic priorities for the Kensington area” now that the COVID-19 pandemic has driven $750 million from the city’s 2021 fiscal year. That includes, Dunn said, seeking “local, state, federal and philanthropic funding.”

Despite the financial issues, the administration says it’s committed to improving the Kensington neighborhood.

“This very morning, workers with several City departments joined residents for a major cleanup at McPherson Square,” Dunn said in an email to Star on Wednesday. “Like many such efforts, you probably didn’t know about this morning’s cleanup, because we didn’t invite the media. Our focus on Kensington is not driven by the need for press coverage, but by the goal of working with residents to bring real change to this community. We look forward to having Councilmember Quiñones Sánchez, and all members of Council, as partners in that effort.”

Get your North Catholic items The Northeast Catholic Alumni Association Christmas sale will take place on Saturdays, Dec. 4, 11 and 18, from noon to...
Read more
News

Award-winning artist Bobby Brown is set to perform at Rivers Casino on Saturday, Jan. 15, at 8 p.m. "Fans will move and groove to some...
Read more
News

Efforts to maintain a vacated lot-turned-sprawling garden in Fishtown received a major boost this past week. The Crease Street Garden, located on the 1200 block...
Read more
5,875FansLike
2FollowersFollow
- Advertisment -