“I find an article about how Ken, who had had this trolley up in Mount Airy that’s been a neighborhood attraction for years, was selling the property where the trolley car was,” said the Fishtown/Kensington BID executive director, Marc Collazzo. “He came up with the idea to have a contest and award it to the nonprofit with the best proposal.”

It was the year 2000 when Philadelphia-based entrepreneur and real estate investor Ken Weinstein opened the Trolley Car Diner in Mount Airy. Beside it was the Trolley Car Ice Cream Shoppe, housed inside of an actual 1948 PCC trolley previously owned and operated by SEPTA.

“We figured if we were going to call it the Trolley Car Ice Cream Shoppe,” Weinstein said, “it needed to be inside of an actual trolley car.”

Just prior to the opening of the diner and adjacent ice cream shop, Weinstein had scored the winning $1,500 offer on the derelict trolley that had been put up for bid by SEPTA.

“SEPTA at the time was repairing trolley cars and putting them on the Girard line but this one was beyond repair,” Weinstein, who convinced SEPTA to put the car up for bid, said, “so we shipped it out to Brookville Corporation outside Pittsburgh and had it restored.”

After it was shipped back to Mount Airy, it began its illustrious 19-year run as a neighborhood staple ice cream spot.

But all good things must come to an end. Late last year, the diner and adjacent ice cream shop closed down for good. Weinstein struck a deal to sell the property, but before transferring it over, he had to do something with this trolley sitting on his plot of land.

“We were trying to think of where the next stop should be for the trolley car, and so we decided to donate it to an area nonprofit,” he said. “So we came up with a contest.”

Weinstein asked organizations interested in the trolley to come up with a one-page proposal on what they would like to do with it. 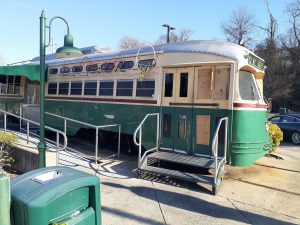 “We had, I believe, 12 submissions,” said Weinstein. “Most of them were from the Philadelphia area, but there was one in Charlottesville.”

Weinstein would evaluate them and pick a winner who’d get the trolley for free. Enter the Fishtown/Kensington BID.

“I find an article about how Ken, who had had this trolley up in Mount Airy that’s been a neighborhood attraction for years, was selling the property where the trolley car was,” said the Fishtown/Kensington BID executive director, Marc Collazzo. “He came up with the idea to have a contest and award it to the nonprofit with the best proposal.”

Without the ability or permission to move it, Collazzo typed up a proposal.

“Marc’s proposal just hit home with us,” said Weinstein, who awarded the trolley to Fishtown. “He was able to productively use the trolley to continue to serve people in the community, and he had a good game plan.”

“That deal fell through at the last minute because Lutheran felt the area would need more work to sustain,” Collazzo said. Alas, Plan B was enacted. Collazzo and the BID decided they’d place the trolley in the grassy area between the Fillmore and the Goose Island Brewhouse, right at the corner of Canal and Laurel streets.

Collazzo’s been sitting on the information for a while. The BID got word they’d won the trolley back in February, but didn’t think it was “appropriate” to announce it when so many businesses were struggling with the pandemic. After questions from Mount Airy residents piled up asking where the trolley went, Collazzo decided to make the announcement.

In April – on the day before Weinstein was set to transfer the land to the new owner – Rob’s Towing & Hauling hoisted the trolley onto the back of a flatbed truck and carried it into storage. It’ll stay there for the next few months, but come March 2021, the BID is hoping to have the trolley operating as a takeout food stand next to the Fillmore. The businesses that will operate the trolley have yet to be announced, but Collazzo said it’s more than likely that the trolley will be jointly run by two Fishtown-based businesses and that there will be “an ice cream component” to the trolley stand. But it will likely sell other types of food as well.

“Ken was interested in our proposal because the BID’s not interested in making money off this,” said Collazzo. “We want these local companies to operate it.”

The great thing about bringing the trolley to Fishtown is that it allows the BID to further expand the Fishtown business district’s commercial footprint, Collazzo said.

“I think it’s like anything else with this neighborhood – I’m always amazed at the diverse unique things that keep cropping up,” he added. “It’s another Fishtown destination location that you can’t find anywhere else.”

Weinstein’s just happy to see the trolley tradition continue, albeit in a different Philadelphia neighborhood.

“We were sad we had to close the Trolley Car Diner in 2019,” said Weinstein, “but we’re really excited it’s going to have a new life in Fishtown and serve thousands of people.”

The office of City Councilperson Bobby Henon has announced plans to rezone the site of the former Philadelphia Coke Company plant via ordinance to...
Read more
Featured | Home Page

When Lemiya Shaat, 18, learned that her mentor, Tony Simeti, would be closing the doors to his gymnastics studio for good, she saw a...
Read more
Featured | Home Page