If developers get their way, the space will occupy 28 four-story townhomes (five stories if you count the pilot houses) and two apartment buildings with 88 residential units and 3,000 square feet of commercial space that fronts on Delaware Avenue. 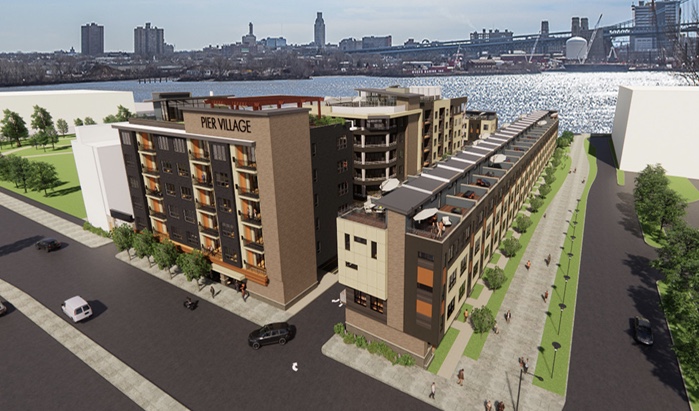 Over the last few months, Philadelphia has been taking another small step toward rehabilitating the Delaware River waterfront by demolishing the one-story industrial warehouse at 1121-41 N. Delaware Ave. – a ghastly eyesore lodged right between Rivers Casino and Penn Treaty Park in Fishtown. If developers get their way, the space will occupy 28 four-story townhomes (five stories if you count the pilot houses) and two apartment buildings with 88 residential units and 3,000 square feet of commercial space that fronts on Delaware Avenue. Plans for the project also include connecting the Delaware River Trail along the river and “dramatic views of the Center City Skyline, Benjamin Franklin Bridge and and the Delaware Waterfront,” according to a presentation packet shown during a Fishtown Neighbors Association Zoom meeting on Tuesday. Each town home will be complete with an elevator and a two-car garage.

Because of the plot’s zoning, the development can be built by right, meaning no variance or community support is needed to build the project. However, because of the size of the property, the development team is mandated to present its plans in front of the city’s Civic Design Review board, which considers “how well the project’s design relates to the public realm,” specifically in regard to the aesthetics of the plan and how it fits into its proposed neighborhood. The development team met with the community in preparation for the meeting with the CDR board.

At the community meeting, residents’ key issue with the project was the appearance of the facade, which consists mostly of metal siding and cement boards, including some brick. FNA zoning chair Ian Wilson, among other residents, called for increasing the amount of brick on the buildings’ facade.

“We know it’s generally more expensive,” said Wilson, “but from a historic and contextual perspective of what’s going on throughout the neighborhood, I think a lot of the metal panels are going to fall out of style before brick does.”

Some other residents complained about parking. While the two rows of town homes all consist of their own two-car garages, the 88 residential units will have only 34 parking spaces available for use.

“Do you expect people to park at the casino or across Delaware Avenue, which is dangerous to cross?” one resident asked at the meeting.

“We would [require] a multi-story structure in order to fit the requirement of one-to-one parking,” he said.

In a letter to the development team, the FNA stated its desire to see the commercial space front along the river instead of along Delaware Avenue, which is where it’s currently slated to be.

Maffei said the commercial space will predominantly cater to the residents of the complex “because it’s such a small space.” He added that commercial space along the river has yet to be tried by a developer, and was unsure of its potential for being a successful commercial location.

“People aren’t shopping as they’re going along [the trail],” he said. “It’s not set up like that yet. I haven’t seen any commercial space [along the river] that I’ve seen.”

Developers previously submitted a different plan for the property, which consisted of 60 single-family homes with off-street parking spaces. The FNA board submitted a letter to the CDR board voicing its disapproval for the project, in part because the project, at the time, failed to incorporate a commercial component and because it thought the property “would be better used as a higher density development.”

The FNA zoning committee is expected to hold a committee vote on the current iteration of the project on Wednesday and will subsequently draft a new letter to send to the CDR board either in approval or disapproval.

The development team has yet to be scheduled for a CDR presentation, but Maffei said he expected to present at the September meeting “at the latest.”

View more renderings of the proposed project below:

If you’re looking to do Eagle chants and hear hosts scream that the offensive line sucks or Doug Pederson is a bum, this might...
Read more
Featured | Home Page

It was about 10 years ago when Teri Ramsay’s family faced the reality of one of the hardest decisions they ever had to make....
Read more
News