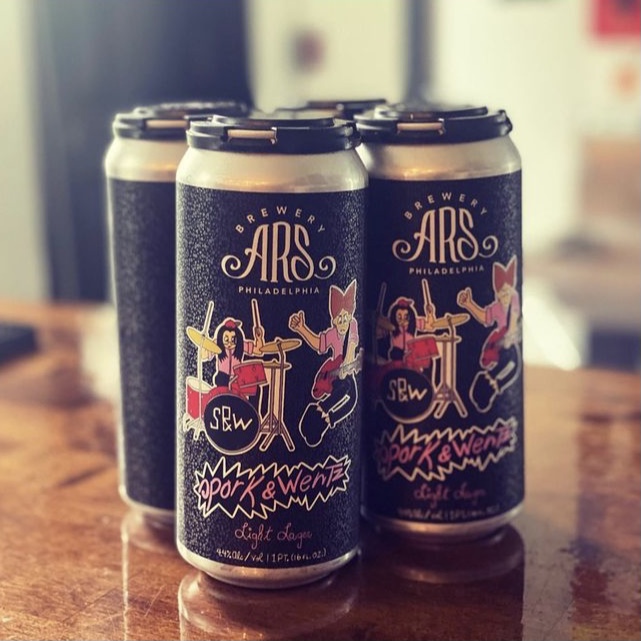 Brewery ARS, a brewery with locations in both Fishtown and South Philly, recently teamed up with the creators of the animated micro series Spork & Wentz to release a new light lager inspired by the show.

In addition to the beer, which is 4.4% ABV, ARS has sponsored two episodes of the series that follows the exploits of its two titular characters. To Alex Reinhard, one of the creators of the show, collaborating with Brewery ARS owner Sean Arsenault was the perfect opportunity to help grow the show’s viewership.

“He was like, ‘Well, what if we did a beer can for it,’ and I was kind of hoping maybe he would present that as an option but I didn’t really want to force him into it,” Reinhard said. “And then he presented it and I was just like, ‘Yes! Let’s do that because that would be sick.’ ”

Originally hailing from Emmaus, Lehigh County, Reinhard graduated from Kutztown University in 2011, eventually moving to Philly not long after. Since arriving in the city, he has worked on various creative ventures such as commercials, documentaries and even a short film through his partnership with Maestro Filmworks.

Always wanting to work on an animated series, Reinhard found inspiration for what would eventually become known as Spork & Wentz while sifting through co-creator and illustrator Pat Richmond’s sketchbook.

“I was looking through his little book of illustrations for this other idea and I saw these two goofball dudes and I was like, ‘Who are these guys?’ ” Reinhard said. “He was sort of just like, ‘I don’t know, I just sort of drew them.’ And I was like, ‘Wait, why don’t we just stop what we’re doing and make a show for them.’ ”

Reinhard and Richmond soon began working on the show, which details the escapades of two hapless musicians in their pursuit of fame, initially as a comic series. After using that format as a way to develop the characters, with the help of Kris Mendoza from Maestro, it soon became a micro series with episodes uploaded to the show’s TikTok, Instagram and YouTube pages.

Looking to further expand the show’s reach, Reinhard approached ARS about joining forces on a project that could help promote both of the brands. They eventually decided on releasing the custom beer, which, according to Reinhard, ideally encapsulates the personalities of the show’s main characters.

“If you’re going to make beer inspired by the show, our thought process was that it should just be a beer that two broke musicians could afford, because that’s what the show’s about,” Reinhard said. “So it sort of fits within that brand of what people are drinking at music venues. And I think it just really made sense, honestly.”

Reinhard hopes that this venture will help to positively contribute to the ultimate goal of seeing the show develop into a longer, more expansive format.