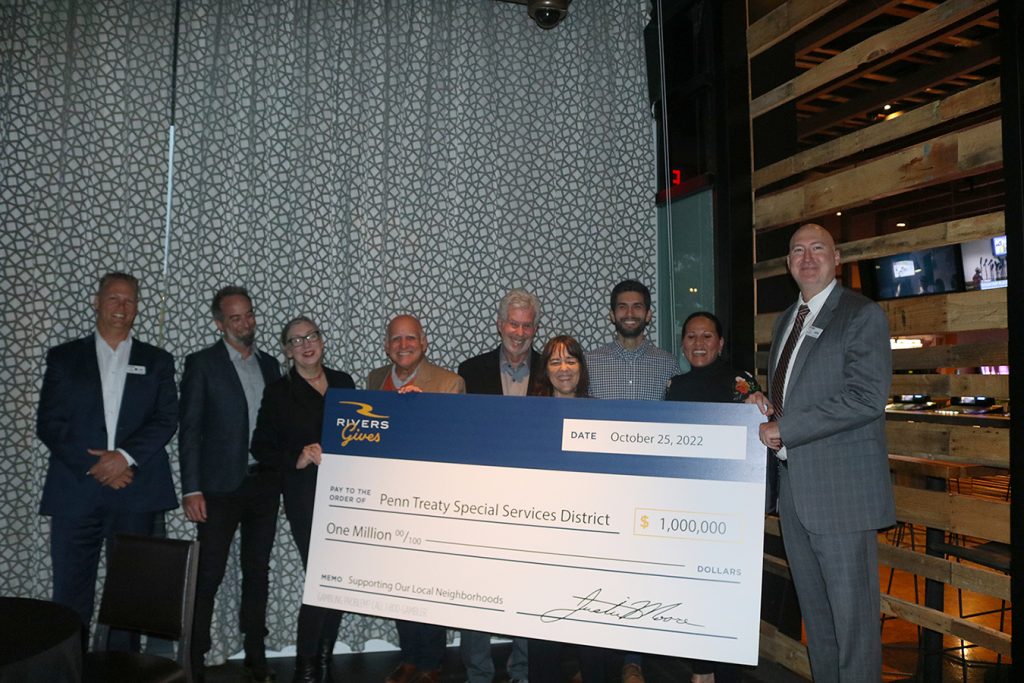 Rivers Casino presented its annual $1 million contribution to the nonprofit Penn Treaty Special Services District during a reception last week at the casino. Rivers’ all-time contributions to the organization now total a little more than $10 million.

Since 2009, Penn Treaty SSD has received a yearly contribution from Rivers Casino and has distributed the money through grants to benefit residents of the immediate neighborhoods surrounding the casino. The organization serves nearly 60,000 residents in Fishtown, Northern Liberties, Olde Richmond and South Kensington.

Through grants to its nonprofit agency partners, the board of the Penn Treaty SSD uses the casino funds to sponsor a wide range of community events, activities and programs in areas such as parks and greening, education, sports and recreation, arts and culture and improvements to infrastructure.

“It’s an honor to support Penn Treaty SSD’s mission of enhancing residents’ quality of life in the neighborhoods surrounding Rivers Casino,” said Justin Moore, general manager of Rivers Casino. “We’re a proud community partner and thrilled that hundreds of grants have been awarded to worthy organizations.”

Over the last year, the Penn Treaty SSD board has awarded nearly 100 grants and sponsorships to organizations in the River Wards, covering such areas as arts programming, youth activities, social services, community events and capital projects.

Some recent notable initiatives include:

• Creating emergency grants totaling nearly $350,000, which were awarded to neighborhood civic organizations and nonprofit agencies to help meet the essential food and household needs of struggling families during the COVID-19 pandemic and bolster the financial stability of nonprofits so that they could remain strong and effective.

• Assisting in land acquisition and development of parks, gardens and nature preserves, and for planting trees. More than $230,000 in awards have been made for these purposes, most notably grants for the Crease Street Garden and the Rose Garden in Fishtown, and for Orkney Park in Northern Liberties.

• Issuing grants totaling more than $280,000 for safe, modern and accessible playgrounds, including a grant of more than $60,000 to the Arab American Development Corporation for the repair, expansion and renovation of its playground in South Kensington.

“Penn Treaty SSD’s success wouldn’t be possible without the wonderful partnership we have with Rivers Casino,” said Stephen Richman, Penn Treaty Special Services District acting board chair. “We’re thankful to Rivers for its support over the past 13 years, and to all the volunteers and nonprofit organizations who work so hard to support our mission. We look forward to continuing our partnership with Rivers so that we can serve the River Wards community for years to come.”

For details on how to apply for a grant or sponsorship, visit PennTreatySSD.org. ••