Home Featured | Home Page Pederson talks about losing Brandon Brooks for the year and his involvement... 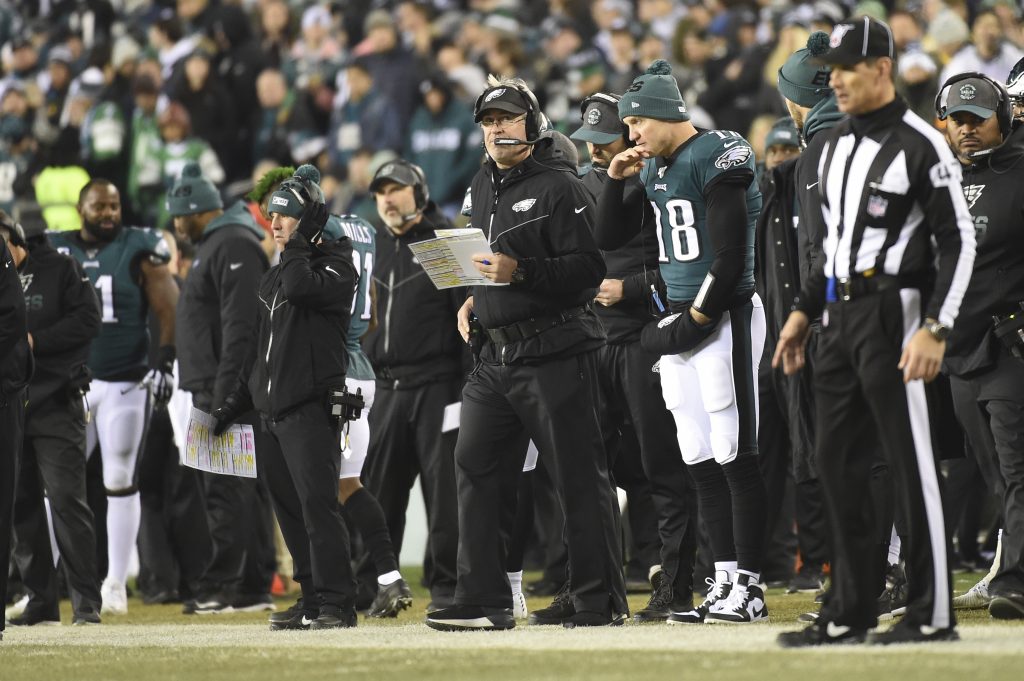 Eagles coach Doug Pederson gave a Zoom news conference on Tuesday to talk about a number of topics, the most pressing and first question asked was his reaction to the news that All-Pro guard Brandon Brooks had torn his other Achilles and was lost for the season.

Brooks suffered the injury on the grounds of the NovaCare complex last weekend.

“Gosh, my heart sunk when I got the news about Brandon’s injury,” Pederson said. “This guy has worked extremely hard to get himself back and back in shape, back in playing shape to have a solid 2020 season. So obviously we feel for him, to have to go through this again, but we know that he’ll push through and he’s done a great job with all his rehab and getting himself back, so we’re very confident there.”

Brooks tore his right Achilles during the 2018 divisional playoff round loss against the New Orleans Saints.

The 30-year-old out of Milwaukee, Wisconsin, made a remarkable recovery from that injury in just eight months and returned to start the season opener in 2019.

Brooks came back in a big way, grading out to be one of the top offensive linemen in the NFL this season. He was selected to his third consecutive Pro Bowl.

The possible replacements for Brooks from the current roster include Matt Pryor, who is entering his third year out of TCU; second-year interior lineman Nate Herbig out of Stanford; rookie Jack Driscoll out of Auburn; and Josua Opeda, now entering his second year out of Weber State.

“As far as the plan moving forward, at this point we’re still looking at a lot of options, obviously,” Pederson said. “Starting with our own roster and the guys that we have competing for those backup spots and possibly those starting spots. We obviously haven’t made any decisions. We are going to take a look at a lot of different scenarios, different possibilities and we have some time before training camp to try to sort these things out. At this time, we are just feeling for Brandon and want to make sure everything goes smoothly with him and getting him back on track for the future.”

Brooks confirmed his injury via social media on Monday evening.

“So I guess now that news is out yes I tore my other Achilles but when life gives you lemons you make lemonade. I’ll be back and better than ever. Appreciate the love”

Pederson was asked if he considered the absence of OTAs and mini-camps as a setback since he can’t evaluate these linemen in real time at the Eagles practice facility.

“I think 32 teams are probably sitting here today going, wow, I wish we had OTAs, I wish we had a chance to evaluate some of our draft picks and some of our free agents, new to the team,” Pederson said. “I don’t want to call it a setback, but at the same time we do have some young players that played for us last year that are going to have to take a big step forward, and some of the guys that you mentioned. Pryor, he played last year at the end of the season. Herbig got in a game there at the end of the year.

“And these guys have to understand that there’s a little bit of a sense of urgency once we get into training camp,” he continued. “Things are going to move fast. Things are going to move fast, and we as coaches need to evaluate these players. I have to put them in position to be successful to show what they can do, and that’s everything that we are in the process of doing right now leading up to camp.”

WILL PEDERSON JOIN PLAYERS DEMONSTRATIONS IN 2020?

Several NFL coaches have indicated they might join players in demonstrations before games this season.

Pederson said he wants to listen first, then see where his place is with regard to public expression of the outpouring of emotion the public and sports world has shown with regard to social injustice.

“You’re hearing a lot about it more and more, but one of the things as a head football coach that we are going to continue to do is have discussions in every area, not only with social injustice but the anthem, with anything that comes up,” Pederson said. “And that’s one of the things that I think going into my fifth year with this football team, we have been able to have dialogue and conversation. So nothing has been determined. I understand that players — and I support players who demonstrate peacefully and stand for something because it’s part of — we have to fix the whys.

It was about 10 years ago when Teri Ramsay’s family faced the reality of one of the hardest decisions they ever had to make....
Read more
Sports

In one job, he keeps the peace. In the other one, he brings the pain. Chris Daukaus has spent the last 10 years working as a...
Read more
Featured | Home Page

When the Rev. Joseph Zingaro, 67, passed away in May, St. John Cantius parish in Bridesburg lost a pastor and a pillar of their...
Read more
5,832FansLike
1,368FollowersFollow
- Advertisment -